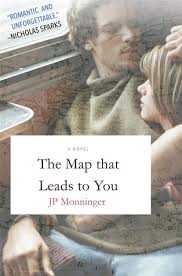 Heather Mulgrew’s world is already mapped out: she is going to travel abroad with her friends after college, come back to a great career in September, and head into a life where not much is left to chance. But that was before an encounter on an overnight train introduces her to Jack, a passionate adventurer who changes the course of her journey and her life.

Throwing Heather’s careful itinerary to the wind, they follow Jack’s grandfather’s journal through post-World War II era Europe: Vienna, Budapest, Turkey—exotic places that serve only to heighten their feelings. As September looms, Jack urges Heather to stay with him, to keep traveling, to give in to the romance of their experience; Heather convinces him to return to the United States.

Jack has a secret that could change everything. And Heather’s world is about to be shaken to the core.

J.P. Monniger’s The Map That Leads to You is a breathtaking novel about love, loss, and the best-laid plans that are meant to be broken.

Apologies if this review is all over the place. It reflects, in a way, my thought process on the book, which I predominantly loved, but with a few slight issues. This is the story of Heather, who is on a journey across Europe with her two best friends, Constance and Amy, who are the best of friends (I adore their friendship and their characters). More to the point, it’s the story of Jack, who Heather met along the way and who she quickly realises has taken her heart.

Jack is on his own journey, via his grandfather (a soldier in the war)’s diary. There are extracts from this diary that show of his issues and feelings about being away from home. This was a lovely touch, although I was a little disappointed because ultimately I don’t think it told me what I wanted to know. The journey itself is shown to us via maps, which I would presume to be excellent, although my kindle wouldn’t show them to me. The book reads basically as if you’re on the trip too, with vivid descriptions of the locations.

This was the part of the story that I adored, in particular as they moved from museum to gallery to monument to reminder of atrocities that had taken place, gathering the odd little facts that you devour as a tourist. As well as this, the actual ‘action’, that is the happenings, were excellent for me, although to be honest I think the fact that I leapt for them meant I was taking the wrong thing from this book. As I said this book was about the journey, and so in this way it was more supposed to be about the mundane, the everyday, the love story between Jack and Heather, which was beautiful in terms of romance, but at times I was waiting for something to upset the balance a little as opposed to just listening to very intellectual back and forths. I blame this on a short attention span and my love of rom coms and thrillers, where it’s all about what will happen next, as opposed to being in the moment and savouring every last look or action.

I really enjoyed this book even though it didn’t tick all the boxes for me, I had no feelings on either Jack or Heather, and it was telling for me that in just a few lines I felt and hearted the love between her best friend Constance and the lovely Raef, and in fact somehow felt I knew Constance and Amy more than Heather, although when the lead is telling the story that can be inevitable.

It’s a tough one to rate, trying to balance the lack of an impression made by the leads against everything else, which was all encompassing and excellent. The ending was a shocker that unfortunately didn’t affect me, which surprised me. Saying all of this I think people who DO connect will declare this book to be a standout. Definitely worth a read and I’m very glad I did. Thanks so much to St. Martin’s Press and Netgalley for this book in return for an honest review.

JP MONNINGER is an award-winning writer in New England and Professor of English at Plymouth State University.