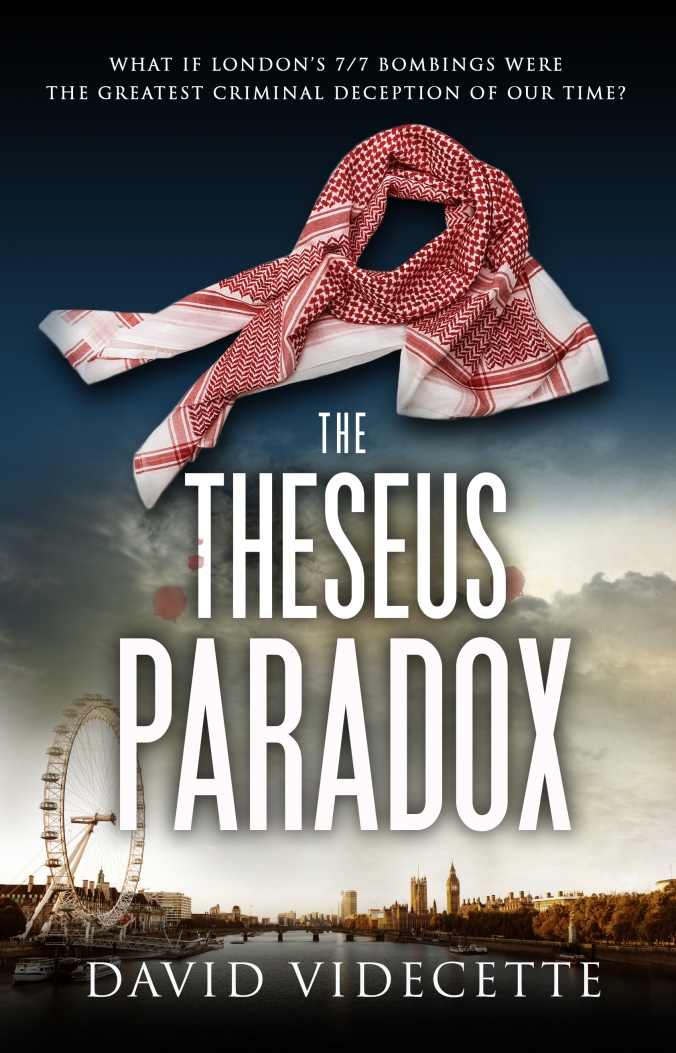 “I can’t tell you the truth, but I can tell you a story…”

How much is real and how much is fiction, only YOU can decide!

July 2005: in the midst of Operation Theseus, the largest police investigation that the UK has ever known, Detective Inspector Jake Flannagan begins to ask difficult questions that lead to the mysterious disappearance of his girlfriend and his sudden suspension from the Metropolitan Police.

While hunting for the answers to the most complex case in British history, one man will uncover the greatest criminal deception of our time.

The Review. First off thanks so much to the author for the copy of this book in return for an honest review. When I first heard of this book I was very interested to find where the line would be drawn between fiction and fact, as the author is a former detective with the Anti-Terrorist Branch who worked on the 7/7 London bombings.  I have to say that there were times I read as fiction, which made it a more enjoyable read, and then, in the more nostalgic parts of the book, the parts that really reminded you that this was something that happened, a day I remember watching on Sky News, repulsed by it all. It is, to a certain extent, difficult to review something based on such an event, as I have to curb any wish I may have to be glib, but saying that, the author was good as to allow some lighter moments, nicely put in to ease some of the tension. Oh and there is tension, delicious, eyes stuck to the screen nervousness that causes your eyes to swallow every single word.

The story is one with twists and turns, clues and dead-ends, car chases and chases on foot, interrogations and deals and I was right there from the start as DI Jake Flannagan followed a hunch on a group of suspects and gave chase. I suppose here is where I should bring up the matter of DI Flannagan himself, an interesting character who is on a bit of a downhill spiral in terms of his personal life. I won’t lie, all of the reviews I read really liked him, while initially I found him a little too weak at times but then liked that there was development in terms of his character. There was also what I call ‘The Horatio aspect,’ as in he seemed to solve a lot himself, while he had a colleague, Lenny, with him at times, more often Jake was stumbling onto the answers (maybe this happens in real life, I’m not sure!). Saying that I loved some of the other characters, and they were all very real. I especially liked Helen, his boss who packed a punch and the fact that his girlfriend, Claire, was in the Security Service, who called all the shots and was so intrinsically important in divulging information (I know, totally sexist, but anyhoo …)

The book contains many revelations for people who have no criminal background; on methodologies used, chain of commands to be followed, technical tidbits, the use of microbiological and food agents to cause damage (of particular interest to me as I used to work in the biopharma area), interviewing, and autopsies, as well as how people can be inducted into extremist ways of living. It was easier to read knowing the author himself had experience of it all, too often you feel that an author may have fallen short in terms of research, and you’d have a lot of moments you weren’t sure were believable, but here you just went about your business, looking over Jake’s shoulder as you both rode the rollarcoaster.

I read this book over two evenings and one morning and if I had been left to it, could easily have read it in one day. I also stopped highlighting mid-book, always a sign for me that I’m engrossed. It’s a long book at well over 400 pages, but the chapters are so short that you have to have ‘just one more,’ which I am such a fan of! I’ve read people say they’d like a sequel/ series with DI Flannagan, which I’m torn about, while I’d be interested to see Jake continue to solve crimes and also see him and his girlfriend, Claire (I’d love to see them happy). I think it might be hard to follow up based on the fact that this is based on real events. By the way, there is a chapter at the end telling you what happened in real life, it’s heart rending to re-live it, and is also interesting to see how close or not the truth is to The Theseus Paradox. All in all, so highly recommended, and will definitely check out more from this author, plus at the moment it is only 99p and sales support The Police Dependants’ Trust charity

David Videcette, former detective with the Anti-Terrorist Branch who worked on the 7/7 London bombings. He has written a novel – a thriller, set in 2005 against the backdrop of the attacks. He is launching his self-published book in October so as not to be seen to be cashing in on the 10th Anniversary of the attack on London.

As a Met detective, David worked on a wealth of infamous cases.  He has placed bugs on scores of vehicles, searched hundreds of properties, chased numerous dangerous criminals and interviewed thousands of witnesses.

David is a former Scotland Yard Investigator with twenty years’ policing experience, including counter-terror operations and organised crime.  David was a key investigator on the July 2005 London bombings and has been awarded several police commendations, including one for outstanding detective work and perseverance which led to his discovery of a bomb factory during Operation Theseus.

2 thoughts on “The Theseus Paradox by David Videcette”