Today I have an excerpt from The Things We Learn When We’re Dead by Charlie Laidlaw, which is FREE on Amazon at the moment (have downloaded my copy and am looking forward to reading!)

The Things We Learn When We’re Dead is about how small decisions can have profound and unintended consequences, but how we can sometimes get a second chance.

On the way home from a dinner party, Lorna Love steps into the path of an oncoming car. When she wakes up she is in what appears to be a hospital – but a hospital in which her nurse looks like a young Sean Connery, she is served wine for supper, and everyone avoids her questions.
It soon transpires that she is in Heaven, or on HVN, because HVN is a lost, dysfunctional spaceship, and God the aging hippy captain. She seems to be there by accident… or does God have a higher purpose after all?
Despite that, The Things We Learn When We’re Dead is neither sci-fi nor fantasy. It is a book about memory and how, if we could remember things slightly differently, would we also be changed?

In HVN, Lorna can at first remember nothing. But as her memories return – some good, some bad – she realises that she has decisions to make and that, maybe, she can find a way back home.

The Excerpt: The old man was as good as his word and a tray was swiftly brought by a male nurse in white clinical overalls who looked spookily like a young James Bond. On it was a plate of grilled lamb cutlets, string beans and sautéed potatoes. There was also a warm bread roll with a knob of butter and, under a silver dome, a bowl of chocolate profiteroles with cream. In short, exactly what she would have ordered in an expensive restaurant, given the choice, and if she’d ever been able to afford to eat in one. Also on the tray was a small metal jug of white wine, which made no sense. During her coma, had it become health service policy to keep patients inebriated? And why the metal jug?<

“The boss says that you’re up and about now,” he remarked, placing the tray down and making sure it was well balanced on her knees. The jug of wine and glass he placed on her bedside table. Why wasn’t there a bunch of flowers in a vase? That’s the first thing her mother would have brought. It was the first thing she always took to friends and relatives in hospital, even the ones who suffered from hay fever.

“Who was the old man? The one who was here a minute ago?” she asked, as if there might be several old men in her wing of the hospital. “Grey hair. Beard. Beads,” she added.

The nurse merely gave a small shrug. “He’ll tell you himself the next time you meet. Anyway,” he added, making for the door, and looking uncomfortable, “if there’s anything else I can do, just ask.”

“I’d like to know how long I’ve been asleep.”

“Asleep?” The nurse raised one eyebrow.

He didn’t reply for a few moments, hands clasped behind his back. “Not long, as far as I know.”

“And how long is not long?” she asked. “Look, if you don’t know, could I please speak to someone who does.” Lorna, running out of patience, had raised her voice. The nurse took a step backwards towards the door.

“All in good time,” he assured her and indicated the tray. “For now, you need to eat. Get your strength back.”

“Look, I really need to know how long I’ve been here. Can I see a doctor? Actually, I shouldn’t have to bloody ask that, should I? What kind of useless hospital is this?”

The nurse, perhaps unused to being shouted at, had backed himself to the door. “Anything you need, just ask. Okay?”

Lorna wanted to scream at him. “But how?” she asked instead, looking around the blank walls for a call button. “And what did he mean by not feeding the little brutes?”

“Just ask, that’s all. Your room is sound-activated so don’t worry, I’ll hear.” He touched a blank place on the wall that somehow made the pneumatic door hiss open. “But he’s right about not feeding them,” he added as the white door closed again, leaving Lorna utterly exasperated.

About the author (couldn’t help taking this from his website because it’s such a  good bio!!!)

Charlie Laidlaw (me) is the author of two novels, The Herbal Detective (Ringwood Publishing) and The Things We Learn When We’re Dead (Accent Press).

I was born in Paisley, central Scotland, which wasn’t my fault.  That week, Eddie Calvert with Norrie Paramor and his Orchestra were Top of the Pops, with Oh, Mein Papa, as sung by a young German woman remembering her once-famous clown father.  That gives a clue to my age, not my musical taste.

I was brought up in the west of Scotland (quite near Paisley, but thankfully not too close) and graduated from the University of Edinburgh.  I still have the scroll, but it’s in Latin, so it could say anything.

I then worked briefly as a street actor, baby photographer, puppeteer and restaurant dogsbody before becoming a journalist.  I started in Glasgow and ended up in London, covering news, features and politics.  I interviewed motorbike ace Barry Sheene, Noel Edmonds threatened me with legal action and, because of a bureaucratic muddle, I was ordered out of Greece.

I then took a year to travel round the world, visiting 19 countries.  Highlights included being threatened by a man with a gun in Dubai, being given an armed bodyguard by the PLO in Beirut (not the same person with a gun), and visiting Robert Louis Stevenson’s grave in Samoa.  What I did for the rest of the year I can’t quite remember.

Surprisingly, I was approached by a government agency to work in intelligence, which just shows how shoddy government recruitment was back then.  However, it turned out to be very boring and I don’t like vodka martini.

Craving excitement and adventure, I ended up as a PR consultant, which is the fate of all journalists who haven’t won a Pulitzer Prize, and I’ve still to listen to Oh, Mein Papa.

I am married with two grown-up children and live in East Lothian.   And that’s about it. 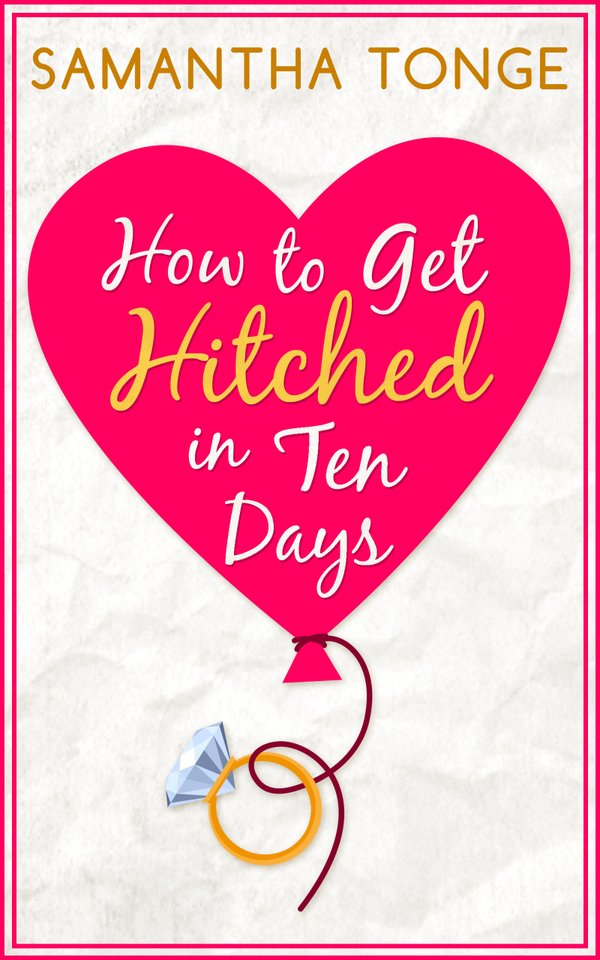 What they say: HOW NOT TO GET THE GIRL… Meet Mikey, every girl’s best friend – he bakes the creamiest cheesecake, loves movie nights and is a great dance partner. For Jasmine, Mikey is the perfect flatmate – he owns a 50s diner that turns out the best food around, gives the best bear hugs and amazing romance advice – after all they’re scoping out the same hot guys! So when her boyfriend proposes in the worst possible way, Jazz knows her best friend will be there to pick up the pieces with gourmet popcorn, Pinot sleepovers and a shoulder to lean on. But Mikey isn’t about to let Jasmine give up on love, and he’s ready to do whatever it takes to mend her broken heart – even if it means helping the one person who sees him as the enemy… Because at the end of the day, all’s fair in the pursuit of true love… right?

The Review: First off how exciting is it to be part of a blog tour of this magnitude on VALENTINE’S DAY?! Talk about happy out, especially since it’s Samantha Tonge, whose book Game of Scones  was a sensation over the Summer in blogging circles, and who is always so vibrant and lovely on social media in both blogging and author circles. The greatest of thanks to Ms. Tonge, Carina UK,  Jenny In Neverland and NetGalley for this book in return for an honest review.

I loved this book. It began with us getting an insight into the friendship between Polka Dot Diner owner Mikey, and Jasmine Jarvis, his flatmate and best friend. They have one of those uber relaxed, no-holds barred friendships where they lounge around together and plan their evenings around each other. From the start it was easy to see that this, coupled with Dave, Jasmine’s boyfriend’s apparent dislike for Mikey, was not going to make things easy.

Nevertheless when Dave proposes to Jasmine, and it falls extremely flat,  Mikey jumps in to help out. He will help Dave propose in the best possible way before Jasmine leaves to go to New York for her career. This of course brings with it the issue of Dave and Mikey not getting on and with it some heart-rending back-stories on Mikey’s part showing how he’s been a victim of homophobia, as Mikey (and we the readers) try to figure out Dave’s dislike for someone so nice, while somehow we begin to suspect that Mikey may or may not be as he seems. This was where the book excelled for me: at times you were so wary. It was one of those ‘who do you like’ and ‘who do you trust’ books because you felt you had to pick a side. Sometimes you were surprised, at others not, and this was what led to a short story that had very few pacing issues, for me it was a lovely page turner.

The nice little trick of multiple points of views also showed us why Jasmine was so upset with the proposal, leading us to some home truths about her past also. The settings were great, in  particular I loved the vibrancy of the Polka Dot Diner, with its appropriate jukebox choices to accompany the mood. The characters were excellent, I fell for Dave big time, then Mikey, then Dave, then Mikey … well, you get my drift. I’m afraid I guessed the ending, but that was fine, I still really enjoyed it. Any book that has friendships, relationships, drama, misunderstandings, comedy, romance, as well as twists and turns that keep you guessing? Highly recommended, and since it’s only 89p at the moment on Amazon, I’d say, off you go! Happy Valentine’s Day:)

Samantha lives in Cheshire with her lovely family and a cat that thinks it’s a dog. Along with writing, her days are spent cycling, willing cakes to rise and avoiding housework. A love of fiction developed as a child, when she was known for reading Enid Blyton books in the bath. A desire to write bubbled away in the background whilst she pursued other careers, including a fun stint working at Disneyland Paris. Formally trained as a linguist, Samantha now likes nothing more than holing herself up in the spare room, in front of the keyboard. She has sold over 80 stories to women’s magazines. Her bestselling debut novel, “Doubting Abbey”, from CarinaUK HarperCollins, was shortlisted for the Festival of Romantic Fiction best Ebook award in 2014. Game of Scones won the 2015 Love Stories Awards Best Romantic Ebook category.