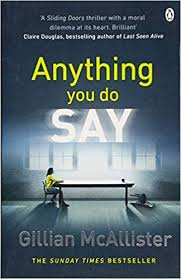 Would you run, or stay and call an ambulance, if it was you that pushed him?

It’s the end of the night. You’re walking home on your own.

Then you hear the sound every woman dreads. Footsteps. Behind you. Getting faster.

You’re sure it’s him – the man from the bar who wouldn’t leave you alone.

You make a snap decision. You turn. You push. Your pursuer tumbles down the steps. He lies motionless, face-down on the floor.

Call 999
Wait for the police to arrive. For judgement, for justice, whatever that may be. You just hope your husband, family and friends, everyone you love, will stand by you.

Run
Stay silent. You didn’t mean to do it. You were scared, you panicked. And no one saw. No one will ever know. If you leave now. If you keep quiet. For ever.

The Review: Some time ago a thought entered my head that I needed to stop reading purely from titles I received from Netgalley and review requests, and to get to the books on my Kindle, bought simply because I saw them either on a blog or Twitter. And so I came to this, a book I’d read more gushes about than nearly any other. Rubbing my hands briskly together (it was cold;)), I began to read.

Anything You Do Say is the story of Joanna and her husband Reuben. They live a very modern, ordered yet chaotic life. They have a list of films they work from to watch tv and number their declarations of love for each other. Both are likeable, both appear content, Reuben more so than Joanna who is looking for something, she doesn’t quite know what.

One night Joanna is followed by someone who bothering her earlier that night. This scene is set the way the actual breakdown from ‘The Breakdown’ by B A Paris, is, you are there and terrified for her in a dark area at night with low phone signal and running footsteps behind her, taking every turn she does. As he reaches her she pushes him. He falls. The resulting story tells of two different possibilities-either she gets help for him or she doesn’t-she tells what happened or she doesn’t.

There are some books that absolutely blow your mind and you are constantly going ‘what the eff?!?!’ This is one such book. I will never be able to gush about it enough. I had shivers starting from my toes and moving up that rarely left me in a book where I just kept praying things were going to go okay for Joanna. There were twists I could never have seen coming, disappointments and shocks that held me in a vice grip and would not let go. I formulated opinions and was shocked that others went against them. Above all I wanted to know where the ending was going and then when it came I was gutted the ride was over. I recommend books to people based on what I think they might generally read but this is one I will most likely be recommending to everyone I can. Superb!