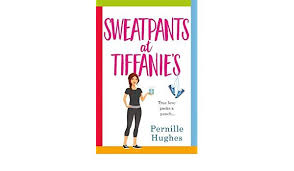 Tiffanie Trent is not having a great week. Gavin, her boyfriend, has dumped her unceremoniously on their tenth anniversary, leaving her heartbroken and homeless.

Frank Black, the owner of Blackie’s boxing gym and where Tiff has been book-keeper for the last decade, has dropped dead. He’s not having a great week either.

And if that wasn’t enough, Mike ‘The Assassin’ Fellner, boxer of international fame and Tiff’s first love, is back in town and more gorgeous than ever. Tiff can’t seem to go anywhere without bumping into his biceps.

When she discovers Blackie has left her the gym, Tiff, with her saggy trackies and supermarket trainers, is certain she’ll fail. Can Tiff step up and roll with the punches, or will she be down and out at the first round?

The Review: There’s times when you read a blurb and it catches you by surprise and you go ‘geney mac I have to read that!’ And so it was with this, a book about Tiffanie, who is living with a guy who is probably one of the best literary examples of an a**hole that there is (!), dumping her. Tiffanie is shocked but doesn’t quite see what we’re seeing and is set on winning him back. Struggling on, we are hit with another shock, Blackie, the owner of the gym Tiffanie works at as a bookkeeper, dies. It is very wrong to think ‘oh well done’ to the way he dies, but as a writer, I’m afraid I did nod and think that (what is wrong with me?!)

I really enjoyed this book. ‘Laugh out loud’ was exactly how to describe it as there was indeed a number of moments where I actually spluttered! It deals with, as you would guess, a male dominated area where a number of men, in particular one who thinks he has designs on the gym, try to force Tiffanie out. I loved her ideas for the gym and the way not everyone was against her, there were a number of lovely characters that were brilliant in their support. The romance and heat was very well done and I read this in one sitting at the fire with a box of Pringles (just setting the scene!) and really enjoyed (both book and Pringles). Thanks so much to Bookouture and Netgalley for the book in return for an honest review.