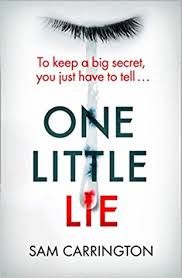 ‘My name is Alice. And my son is a murderer.’

Deborah’s son was killed four years ago. Alice’s son is in prison for committing that crime.

Deborah would give anything to have her boy back, and Alice would do anything to right her son’s wrongs.

Driven by guilt and the need for redemption, Alice has started a support group for parents with troubled children. But as the network begins to grow, she soon finds out just how easy it is for one little lie to spiral out of control…

They call it mother’s intuition, but can you ever really know your own child?

Deeply psychological and suspenseful, One Little Lie is a twisty and unnerving story about the price of motherhood and the unthinkable things we do to protect our children.Perfect for fans of Cara Hunter and Laura Marshall.

The Review: I had heard so much about Sam Carrington, and kept saying that I needed to get to her books, and, now that I’ve read this I will most definitely be returning for more. This is the story of (as you see in the blurb) a number of women, linked by their children’s crimes. It’s an ingenious premise, when a person commits a crime they have little thought of the impact it will have on their parents or how their parents will cope with the knowledge that they have given to the world a person that others see as evil, whereas they need to find a way to put together the idea of their child committing a crime with the memories of their child as a child or in their good times.

There are numerous povs in this book and I was thrilled to see some of them as each added a new dimension, however some people might find there too be too many (I like a lot of characters in a book). I will say that there is little mention of Connie in the blurb, the psychiatrist turned detective in the novel, where I felt she was one of the lead people to follow. Connie has her own issues which arise from an event that happened before the book.  I felt this was a pity-I had read that this could be read as a standalone- I feel like I could have done with knowing Connie’s backstory in more detail and would have enjoyed it, but will head back to read it anyway!

All in all a book I really enjoyed with twists, turns and surprises that I appreciated. Thanks so much to Avon  for the book in return for an honest review.

2 thoughts on “One Little Lie by Sam Carrington”