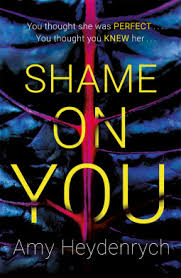 What they say: Have you ever reached the New Year and thought it’s time to reinvent yourself?
Have you ever lied about who you are to get more likes?
Have you ever followed someone online who you think is perfect?

Everyone loves her. Everyone wants to be her.

But when Holly is attacked by a man she’s only just met, her life starts to spiral out of control. He seemed to know her – but she doesn’t know him.

The Review: I can’t BELIEVE I’ve had this sitting there waiting to be read so I’m reviewing straight away. Here was a book I gobbled up in a night, absolutely LOATHE to put it down. So we start in McDonalds, where we are sitting watching all the usual madness that comes at night time and suddenly all eyes are on the young woman running towards the counter. Some phones begin to film as

“Something about her hair, her stance, the way she moves, suggests that something is about to happen”

And so we enter Holly’s world, where everything is about clicks and likes and people wanting to see a filtered image of a person they think they can become. Holly is famous for being the girl who beat cancer purely through clean eating, and everyone wants a piece of her, even now, when she has become an object of pity due to her destroyed face and mental health issues. It is a book that demonstrates how tough and cruel modern day living and people are, and how everyone is quick to judge. It shows us both Holly and her attacker’s past, as we see his rationale for the attack and subsequent haunting of Holly. I have to admit his pov grabbed me as much as Holly’s, and I found some of his later issues to be almost comedic as his mindset morphed and unravelled. The ending didn’t quite rank alongside the rest of the book but it didn’t matter. Very much recommended and beyond enjoyable. Thanks so much to Netgalley and Bonnier Zaffre for this book in return for an honest review.