So today it’s great to have Laura Heffernan here, author of The Reality Star Series. First, though, the books! 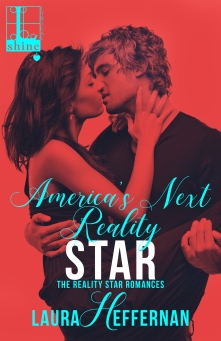 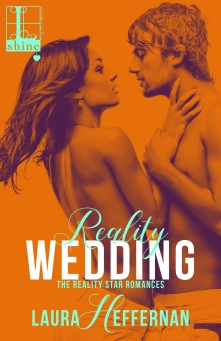 Buy the series on Amazon

About America’s Next Reality Star (book 1)

SEEKING THE SMART ONE

Twenty-four-year-old Jen Reid had her life in good shape: an okay job, a tiny-cute Seattle apartment, and a great boyfriend almost ready to get serious. In a flash it all came apart. Single, unemployed, and holding an eviction notice, who has time to remember trying out for a reality show? Then the call comes, and Jen sees her chance to start over—by spending her summer on national TV.

Luckily The Fishbowl is all about puzzles and games, the kind of thing Jen would love even if she wasn’t desperate. The cast checks all the boxes: cheerful, quirky Birdie speaks in hashtags; vicious Ariana knows just how to pout for the cameras; and corn-fed “J-dawg” plays the cartoon villain of the house. Then there’s Justin, the green-eyed law student who always seems a breath away from kissing her. Is their attraction real, or a trick to get him closer to the $250,000 grand prize? Romance or showmance, suddenly Jen has a lot more to lose than a summer . . .

Jen Reid’s life after walking off a reality show has been great–she’s gone from being a broke twenty-four-year-old Seattleite with no love life and no job to the twenty-five-year-old who got the guy, moved to Miami, and is starting a bakery with her best friend. She thinks her showmance love might be about to propose. And with mouthwatering goodies based on everyone’s favorite shows, her business, Sweet Reality, is destined for success.

That is, until a killer competitor opens right across the street. If she’s going to save Sweet Reality, Jen has to come up with a secret ingredient–like the recipe that won Totally 80s Bake-Off. Jen can get it–if she steps back into the spotlight. Soon she and her boyfriend are out to sea on a cruise ship full of reality stars, including her nemesis, Ariana; her lying, cheating ex; and some wicked producers looking to bring the drama. Separate cabins, “surprises” from her past, and scenarios tailor-made to spark fights are just the beginning. But with her self-respect, her business, and her future on the line, the fallout from this made-for-TV plotline will be all too real . . .

When Jen Reid escaped a reality TV cruise with her relationship intact—if not her hair—she swore she was done with the cameras for good. Sure, she and Justin met, had their first kiss, and got engaged with tape rolling, but manufactured drama and ruthless producers have shaken them up more times than she can count. With Jen’s reality-themed bakery just getting started and her brand-new lawyer fiancé in a pile of debt, they’re a long way from glitz and glamour, and that’s fine by Jen. Until the Network calls and tells her that unless she says “I do” to a wedding special, Justin will be out of a job.

Now Jen has two weeks to plan an all-expenses-paid “dream wedding”—and dodge the tricks and traps of a showrunner happy to mess up her future in the name of ratings. Luckily for Jen, she’s got plenty of experience with cake and popcorn. But when real-life drama and reality TV twists collide, the cliffhangers may just follow her right down the aisle . . .

Laura, welcome to the blog. Can you tell us a little bit about your books? Who do you think they would suit?

The Reality Star series follows Jen, a millennial who tries out for a reality show to help pay medical bills from an accident. She’s looking to win the cash prize, but is surprised when she finds herself falling for co-competitor Justin. The books should appeal to fans of Sophie Kinsella or Leah Marie Brown. And the reality show is the backdrop, so even people who don’t watch a lot of reality TV can still enjoy them.

Where did the idea for the books come from?

My best friend went on a reality show a few years ago, one that is fairly similar to the show Jen stars in on the show. It was fun to see all the background information and all the ins and outs of reality TV. My friend’s experience got me thinking about what kind of show I’d want to be on myself, and The Fishbowl was born.

Have you always wanted to write chick lit?

I’ve always wanted to write. Over the years, I’ve tried various genres based on what I was primarily reading at the time. But chick lit has always been my first love. It’s what I always go back to, and it’s the only type of book I’ve ever been interested in enough to finish one (or several).

Can you tell us what you’re up to next?

I’m currently in the middle of writing my next series, Gamer Girls. It follows three college roommates who love board games, each with their own book. In the first one, Gwen is determined to win the American Board Game Championship–and equally determined not to get played by last year’s champion, Cody.

Lastly, If you had to  pick three favourite books what would you pick (they  don’t have to be chick lit by the by!!!)?

This question is so hard! The Shopaholic books will probably always be among my all-time favorites. The series has had some ups and downs, but those first three books were my introduction to chick lit. I go back and read them all the time. I also adore the Harry Potter series, which I like to count as one book. 🙂 And I will forever adore The Awakening by Kate Chopin.

Thanks so much for coming over, Laura!