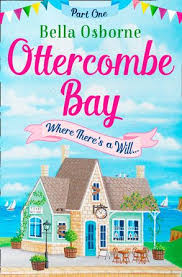 Escape to the Devon coast, with Part One of a brand-new four-part serial from the author of Willow Cottage.

Daisy Wickens has returned to Ottercombe Bay, the picturesque Devon town where her mother died when she was a girl. She plans to leave as soon as her great uncle’s funeral is over, but Great Uncle Reg had other ideas. He’s left Daisy a significant inheritance – an old building in a state of disrepair, which could offer exciting possibilities, but to get it she must stay in Ottercombe Bay for twelve whole months.

With the help of a cast of quirky locals, a few gin cocktails and a black pug with plenty of attitude, Daisy might just turn this into something special. But can she ever hope to be happy among the ghosts of her past?

The Review: I have to admit I’m a bit gutted I didn’t click with this, a series that I had heard a lot of people gush over. It’s the story of Daisy Wickens, a girl who’s a bit adrift until she’s left a building by her uncle and told she has to stay in the lovely Ottercombe bay for a year. I have to admit from the start I didn’t get on with Daisy. She was the type of person who is non stop negative with mean looks, rolls of her eyes and general boredom with everything.  I can deal with negative characters when they have a personality that still grabs you, and I love sarcastic interesting negative characters too, but with Daisy I honestly believe it was just simply that she was not a nice person! I’m all for character growth, and maybe Daisy does redeem herself later in the series, but I could get nothing from her.

The thing was, then a random smile or burst of excitement would be thrown in that confused me, it would be out of place and out of character and would disappear in the burst it came from leaving us with Daisy complaining again. I don’t know if it was editing issues or just Daisy’s positivity not quite appearing as it should, but either way, I was disheartened and quite gutted. I also had an issue with the drip feeding of information that didn’t need to be drip fed. I know dumping of information is a no-no, but saying that I honestly think sending someone around in circles on purpose is unnecessary.

The building left to Daisy was beautiful and unusual and I had great hopes for it and the fabulous settings and nice little mysteries that I would have been interested to have found out about. I loved some of the locals, and actually if Tamsyn had been the lead character I think this book would have been a high review.

I checked out the other books to see if they were based more on other characters, in which case I would have read, but the blurbs were all the same and so I think it’s probably a series I’ll give a miss. Saying that I have other Bella Osborne books on my Kindle and might give them a go, given that Daisy was my problem (I know I’m laboring the point and I’m sorry)