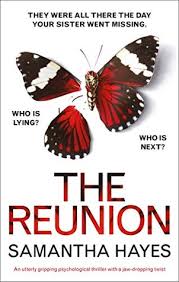 They were all there the day your sister went missing… Who is lying? Who is next?

THEN – In charge of her little sister at the beach, Claire allowed Eleanor to walk to the shop alone to buy an ice cream. Placing a coin into her hand, Claire told her to be quick, knowing how much she wanted the freedom.

NOW – The time has finally come to sell the family farm and Claire is organising a reunion of her dearest friends, the same friends who were present the day her sister went missing.

When another girl disappears, long-buried secrets begin to surface. One of the group hides the darkest secret of them all…

If you love Sue Fortin, Gillian Flynn and The Girl on the Train, this psychological thriller packed full of twists and turns will be impossible to put down.

The Review: I had heard so much about this book and so was absolutely thrilled when I was approved. This is the story of Claire, who has decided to help her dad, who is struggling, by having a  reunion of her friends and family. I loved the coming together of everyone and the everyday, which was as readable as the suspense. There are many voices in the book, one in particular, which, even now, I found to be eloquently and stand outishly done, with an innocence and fragility that was mind blowing.

As you are meeting everyone you have in the back of your mind that someone possibly had something to do with the disappearance of Eleanor, and the author most definitely lays a number of foundations so that you’re patting yourself on figure out what happened to poor Lenny, before you’re sent off in another direction. Actually I feel I have to add at this stage that I think some of the traps laid were never explained, that or I missed them, but I was gripped enough by the book that I don’t think I missed anything. There were a lot of characters, although for the most part you had them clearly enough drawn in your mind that that didn’t matter.

A lot of reviews have said they worked out what happened early on and I have to say fair you-know-whats to them, because I most definitely didn’t! I read this over two nights and was absolutely loathe to put it down. Thanks so much to Bookouture and Netgalley for the book in return for an honest review.