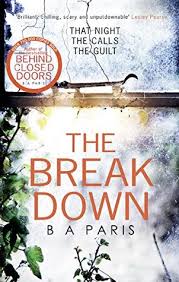 What they say: It all started that night in the woods.

Cass Anderson didn’t stop to help the woman in the car, and now she’s dead.

Ever since, silent calls have been plaguing Cass and she’s sure someone is watching her.

Consumed by guilt, she’s also starting to forget things. Whether she took her pills, what her house alarm code is – and if the knife in the kitchen really had blood on it.

Bestselling author B A Paris is back with a brand new psychological thriller full of twists and turns that will keep you on the edge of your seat.

The Review: To this, and a book that is probably on every single review website that I follow. I had heard so much about this book,  mixed reviews, with a lot of people saying it was a standout book for them and so I pounced. I have to say I did really enjoy this. This is very much a book for those who don’t like too much toughness or gore but enjoy their suspense. The beginning of the book IS probably a standout for me, despite all the thrillers I’ve read since I can still remember the weather, the torrential rain pouring as Cass tries to get home to her husband, Matthew. You know when the rain gets so bad that you’re staring in horror at the windscreen, thinking that anything could happen because you can’t see a thing? Well this is what happened to Cass, in the dark of night, and so she makes a choice that will change everything for her.

‘I veer off to the left, taking the shortcut that Matthew didn’t want me to take. A horn blares angrily behind me and as the sound chases me down the pitch- black lane into the woods, it feels like an omen. Even with my headlights full on, I can barely see where I’m going and I instantly regret the brightly lit road I left behind. Although this road is beautiful by day-it cuts through bluebell woods- its hidden dips and bends make it treacherous on a night like this.’

Hook, line and sinker. I was totally in. What happens then is horrible but so realistic (in a way, if you know what I mean, I don’t come across this sort of stuff myself, but it could happen!) Cass sees a girl sitting in a car at the side of the road. She wonders should she get out, is the car broken down or is the girl just waiting out the rain like herself? and has that pull of conscience we all experience at times, she wants to get home to the safety of her own house, but doesn’t think it’s right that she should leave. Of course she justifies driving off (with justifications I’d have used myself) and everything trickles into motion for a book thats ridden with guilt and uncertainty. As you can see from the blurb above, Cass is what you call an unreliable narrator, we don’t know if we can believe her version of events and to cement this we get a story that deserves a special mention, that of her mother, which had me shed a tear at the story of Cass’ mother and which gave it an added edge over other thrillers.

I really really enjoyed this book, with its many characters, that did keep you guessing. I had an idea what had happened earlier on, but didn’t guess the finer details. I did think it could have been slightly shorter, there was a bit of repetition for me in the middle, and conversely the ending felt like it was thrust at you too quickly and to be honest was just an ickle bit far fetched. Saying that, as a read in its totality I didn’t want to put it down, I was glued in a way I’ve only been for a handful of reads. All in all very much recommended (and I will be recommending it!) and I look forward to reading Behind Closed Doors. Thanks to the lovely people at St Martins press and Netgalley for the book in return for an honest review.

B.A. PARIS is the New York Time, USA Today, and internationally bestselling author of Behind Closed Doors. She grew up in England but has spent most of her adult life in France. She has worked both in finance and as a teacher and has five daughters.

6 thoughts on “The Breakdown by @BAParis @StMartinsPress”