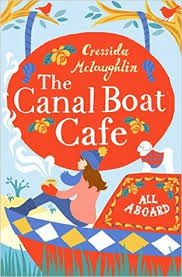 Welcome to Cressida McLaughlin’s heartwarming The Canal Board Cafe – step aboard!

Summer Freeman returns to the waterside village of Willowbeck to help with the Canal Boat Café, which used to belong to her mother. Valerie, a fortune teller, has been running things, but the business is in a pickle. The coffee machine is jammed, the cake offerings are paltry, and not all of the locals want to see the café succeed. And then there’s the handsome wildlife photographer, Mason, from the boat next door, whose Border Terrier steals some bacon right under her nose. Her Bischon Frise, Latte, loves their boating neighbours, but Summer is less sure.
As her old life and the community of Willowbeck begin to entwine, Summer finds herself setting sail on a new adventure but will she find herself navigating choppy waters instead?

The Review: There was a time when it seemed every blog had The Primrose Terrace series by Cressida McLaughlin. It was lauded in all the circles I followed, with much gushing and excitement. I’m sorry to say for some reason, in my blogging ignorance, I looked at the fact that this series (as the word ‘series’ would tell you), came in installments, and so I ignored them with a view to possibly reading in the future, although I possibly never would have. Oh what a fool (I have since jumped into series and in fact sometimes prefer to read a number of short installments spaced out as opposed to a full length book)! Saying that the Primrose Terrace series has now been put into one book for those of you still not tempted to give a series a go. This book is my first introduction to the great Cressida McLaughlin, and it most definitely will not be my last. This is, without a doubt, my book of the year so far and one that has moved me back to chick lit/ rom coms, from which I had been straying recently.

It begins with us meeting Summer Freeman as she arrives in the canal side village of Willowbank mid February. I’m mentioning the time of the year here, because there are just so many Summer/ Christmas books, and lately it seems that there is a remaining number of months to be dealt with that have been made obsolete! The crisp weather added to the beautiful cosy wintry atmosphere we’ve come to expect before the Spring truly arrives, and on viewing a wooden signpost that allowed us an introduction to some of the main entities of Willowbank, I think I was already hooked.

Next we viewed the inside of her mother’s cafe boat, and the disrepair it had fallen into, and watched as Summer was faced with a problem, would she decide to put efforts into bringing the cafe back to its former glory or let it go? As I’ve said before, I love a good fix up story and so I hoped the answer to this was ‘yes!’ As well as this we were given some insights into some of the secrets behind Summer’s mother, and why she mightn’t have been hugely welcome in Willowbank, and I look forward to this unfolding in the next few installments.

In fact the introductions to the characters, the boats, the buildings were what endeared me hugely. We were never bombarded with information, we merely walked alongside Summer observing as we went. I warmed to her mother’s best friend Valerie, and was interested as to her observations of her mother’s presence (in some other books I would have been sceptical, but I’m interested here, purely due to the writing style and the emergence of another mystery, one of various objects that begin to turn up at the cafe). Actually, in terms of characters her best friend, Harry, was lovely and I loved the kooky Norman the fisherman who reminded me of the Jim Trott from The vicar of Dibley, with his mumblings and musings. The love interest issue was done amazingly, with the presence of one old, Ross and one new (Mason, who was perfection. Seriously. Perfection!) There were a number of smile out loud moments, great pacing, a realistic timeline on it all and by the end of the book I was in a fantastic mood. My only issue at all was that at times there was the slightest amount of overacting and I by that I suppose I mean the slightest overreaction, especially by the venom in Jenny, which, even if justified, was a bit too full on for me.

All in all, I loved this so much (had you guessed?;)) and I’ll leave you with this, should Cressida McLaughlin ever decide to give classes in writing chick lit, I’ll be right at the front taking notes. After a bit of a run where I couldn’t find a chick lit book that made me excited, this book has definitely done the job. As I said, book of the year so far. End of gush.;)