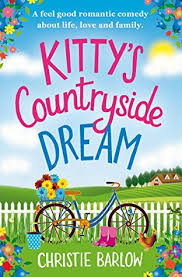 What they say: When Kitty inherits Bluebell Lodge from her grandmother, a farm in the beautiful Staffordshire countryside, it’s time for fresh air and a fresh start. Up to her elbows in chickens and ponies, Kitty soon realises there’s an awful lot to learn about farming. Still, at least the locals seem friendly, not least her handsome neighbour Tom…

But just as Kitty is beginning to find her feet, and the possibility of love, the discovery of a long-hidden diary, by a mysterious character called Violet changes everything. Who is Violet and what is her message for Kitty? As Kitty fills in the lost pieces of her family jigsaw and discovers some shocking revelations, will her countryside dream and blossoming relationship fall to pieces? When it comes to life in the country, nothing is ever quite as it seems …

A heart warming, moving and funny tale, perfect for fans of Trisha Ashley and Cathy Bramley.

The Review: I’m afraid this book didn’t quite live up to what I’d hoped it to be. Given that the cover of this, which I would say hands down wins the best romantic comedy cover so far this year, and the reviews, of which the word ‘glowing’ doesn’t even come close to describing, I’d say I was quite disappointed.

It began with the beautiful descriptions of Kitty’s new abode, and I settled in for a homely, warm read, unfortunately then I hit a few stumbling blocks. Whereas Kitty started out as bright and positive, she became overly dramatic in places for the character she had originally seemed to be and I was disappointed. Added to this she fell for her love interest ‘Tom’ extremely quickly which is something of a bug bear of mine in rom coms.

The comedy was not fully to my taste, it seemed quite forced or maybe staged, which sounds odd in relation to a book and yet there it was. In the same way the dialogue felt clipped, using for example “you have” instead of “you’ve” and as a result it came across as not being very realistic.

The diary extracts also turned the book into a different one than I set  out to read; one that was perhaps more suited to a dramatic romance novel as opposed to something that was marketed to be a romantic comedy. They were so detailed that they almost felt like they weren’t diary extracts, just another way to show us the past. All in all I’m very torn, as the descriptive parts of this book were brilliantly done, vivid and beautiful, but I felt that these were let down and the book was different to the  one I would have adored, the one that began with a positive, ready to try anything Kitty arriving in Bluebell Lodge. That being said, the number of positive reviews out there tells a different  story so take mine with a pinch of salt. Thanks to Netgalley for the book in return for an honest review.