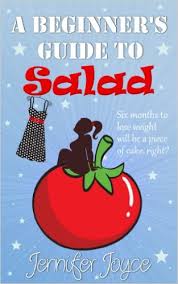 What they say: Ruth loves nothing more than curling up in front of the telly with a family-sized bar of chocolate. She doesn’t do diets and she certainly doesn’t do exercise. But all that changes when she’s invited to her school reunion.

Bullied at school for being overweight, Ruth’s first reaction is to rip the invitation into a million pieces. But then Ruth hatches a plan. She’ll lose the weight and arrive at the reunion looking gorgeous and glamorous, leaving her old classmates in awe. Especially her former crush, Zack O’Connell.

With the help of her friends and a new, unbelievably hot colleague, Ruth begins her transformation. With six months until the reunion, losing weight will be a piece of cake, right?

The Review: As a lot of you probably know, I only started blogging last year. On commencing, I looked at many book blogs, scouring for reads that different reviewers had in common, so I had a starting point in terms of what to read. ‘A Beginner’s Guide to Salad’ was the first book that jumped out at me and I downloaded straight away. The reviews also led me to Jennifer Joyce’s website (take a look at it here) and I was hooked, not only was it bright and inviting, with so many interactive posts, but there were reviews on books I’d read that I agreed with wholeheartedly, as well as stories by Ms. Joyce that were short but clever and satisfying.

Alas, then my Kindle began to fill up and it wasn’t until I did an author Q&A with Jennifer (I know, the first name thing seems too informal, especially when you’re talking about that kind of talent, but anyhoo!), that I jumped back to it, and quickly downloaded A Beginner’s Guide to Christmas, a (free) short story that, as far as I know, is the prequel to the Salad book, and The Mince Pie Mix up (both started and tragically abandoned, following the great Kindle break-down of 2015).

‘She wished she had a friend more than anything, even more than she wanted a boyfriend’

Now if I’d thought that was bad, what followed, the description of the heartless bullying that she went through actually stopped me in my tracks. It was disgusting. This theme continued throughout the book, with ignorant salespeople and the friend of an acquaintance belittling her because of her size. When Ruth decided to lose weight to attend her high school re-union I put my hand over my eyes (in my head of course, because otherwise how could I have continued reading?!) and then settled into reading some of the gut wrenching (literally) and hilarious diets she decided to undertake, as well as exercise routines, some of which were horrendous.

The book was told from several points of view and I loved the way there was some overlap between events happening, making it unfold easily before your eyes. It actually reminded me of a film called ‘This Year’s love’ (yes, it does Feature David Gray’s song, in fact he has a cameo), which also features various couples, all trying to find their way through life, with hilarious goings-on causing miscommunications and mix-ups along the way.

In particular, some of the scenes in Ruth’s office kept me very entertained. The different characters were brilliant, the lovely housemate Billy, her best friend, Erin, who was JUST what she needed, Theo, who reminded me of Spike from Notting Hill. The Beginner’s Guide to Salad was real. Ruth wasn’t perfect and neither were the other characters. They were vivid and loud and brilliant. Throw all of this together with love triangles, love venn diagrams, whatever they were and you had my type of book perfection. I have a post coming up on authors I’m following as a result of books I’ve read as a blogger and Jennifer Joyce is one of them. I am now firmly a Fan.